Sundays are a favorite of mine when in Paris.  We attended Mass at Notre Dame, which is completely amazing each and every time.  The organist at the end of mass plays for such a long time.  The bells toll outside and you can still hear the organist and the bells as you exit and start to walk away.

We were on our way to Île Saint-Louis in the 4th arrondissemont, just a short walk 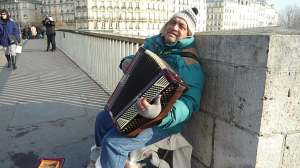 over the river Seine.  We started to hear someone playing the accordion, and it was such a lovely French familiar song.  I decided to try the video settings on my camera.  If you would like to hear him, click here: Paris Accordionist

We continued walking past this very tempting offering of ice cream flavors, as we were on our way to have dinner at Sorza once again.  I took some pictures of some quaint shops where I must admit I strolled in and out of each one.  Some were still decorated for Christmas, others so colorful.

I was drawn in once again to my favorite hat shop, where I bought three hats.  I also bought a pair of gloves since I had lost one pair, and one glove of another pair.  The only other place I lose gloves is in a cab in New York!  We went on to dinner and we really enjoyed the plat du jour. We had the entrée, plat and dessert.  Yes, three courses along with some red wine and then coffee.

We stopped into our favorite chocolate shop, sampled some delicious treats and bought some for home.

When we reached the next block on the bridge that crosses the Seine, there were so many people standing around watching a street entertainer.  He was funny and terribly energetic.  He really had the crowd laughing and he performed for quite sometime.

If you would like to see him perform in a short video, just click here:  Paris Street Entertainer

Sundays are always great in Paris.  Speaking of great, I thought perhaps I dropped my glove in a pharmacie.  I went back to two of them that I was in the other day. 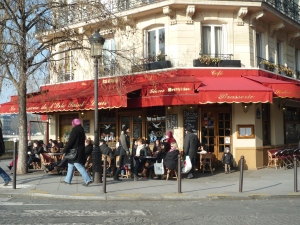 I didn’t have any luck in the first one, so on to the second one.  I asked the sales girl and she replied “Ah, oui, oui!”  She walked behind the counter to a box and my glove was sitting right on top.  The girl handed the glove to me and I was so thrilled to get it back.

This entry was posted in THE WAY I SEE IT and tagged Entertainer, Ile Saint Louis, Sundays in Paris. Bookmark the permalink.

I'd love to hear from you, please reply Cancel reply