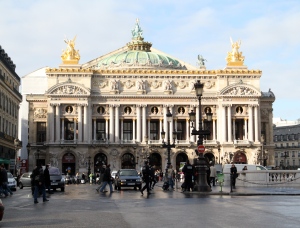 The construction of the l’Opéra Garnier was completed in 1875.  It is located at Place de Opéra here in Paris.

In 1896 part of the Grand Chandelier broke and gave way killing one person.  It is because of this incident along with the underground canals that led to the writing of “Phantom of the Opera,” by Gaston Leroux in 1910.

The 2,200 seat opera house was designed by Charles Garnier.

I took so many photographs here because it is so grand and so large.  The details are just amazing.  I am including some with this post just to give you a peek and the idea of just how beautiful this opera house is really.

The chandelier is said to weigh over six tons.

In 1969 this ceiling was painted by the famous Marc Chagall, which surrounds the chandelier.  There is currently a major exhibition of the work of Marc Chagall for the 25th anniversary of his death in 1985.  It is at the Museo dell’Ara Pacis in Rome. The exhibition is to include over 140 works and is entitled “The Upside Down World of Marc Chagall.”  We are going to Rome and plan on seeing it around the middle of March.  The exhibit will be on until the 27th of March. 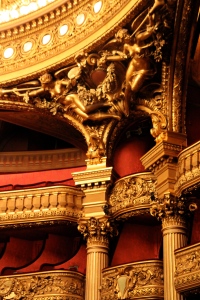 Even outside there is a beautiful balcony all done in marble which could be enjoyed during intermission.  There are busts of the great composers too, like Beethoven and Mozart among many others. 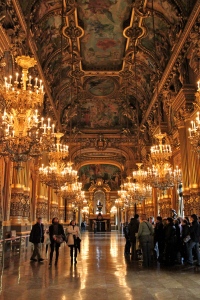 It is quite lavish, with its alcoves, sculptures, cherubs, friezes and many columns.  It was designed to allow the large crowds of people to move throughout.

Pictured here is the Grand Foyer.  You can see the many chandeliers that line each side of the large room.  The ceiling is utterly gorgeous and beautifully ornamented.

I hope you enjoyed the pictures that I took of the Opéra Garnier.

This entry was posted in THE WAY I SEE IT. Bookmark the permalink.

I'd love to hear from you, please reply Cancel reply